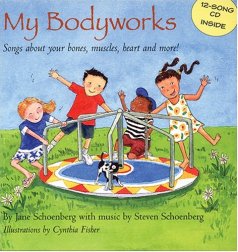 As part of our exploration of the human body, I selected a lot of materials.  Far too many materials, really, but one book I really enjoyed using is called My Bodyworks, which is filled with song lyrics (CD included) for songs about different aspects of the body.  Many of these songs encourage movement while singing, and the end of the book has details about the human body as a reminder to the content of the song lyrics.  I haven’t played the CD yet (I’m afraid to, given the frequent disappointment or annoyance I have with for-kids music collections), but reading the lyrics to my son as I would poetry, and engaging our bodies in some of them was a lot of fun.  We’ll be hanging on to this one for a while.

My new students and I had our second meeting, which involved their first projects and detailed discussions of our readings.  The readings were hard, most of them weren’t able to finish “The Ones Who Walk Away from Omelas,” and one couldn’t get through “The Lottery.”

I apologized and admitted the selections were a bit of a cruel test.  The first four were among some of my absolute favorites.  Ones I think everyone should read, and three of them are hard.  Emotionally brutal.  I shared with them the story of my experience taking a class at university titled “The Anthropology of Rock and Roll.”  I didn’t go into too many details, but on the first day, our professor played videos of a particular rock star renowned for his grotesqueries — he was violent, gross, brutal, repugnant, and did vile acts on stage for attention and to cause a visceral response to his art. The professor said, if we could get through the first day and still want to come back, the rest would be easy, and he was right.

While these stories were difficult reads for sensitive souls, my students proved themselves.  The projects were insightful, diverse in ideas, and all showed they grasped the readings well.  One wrote an essay analyzing their choice in “The Lady or the Tiger?”  Another wrote a poem about “The Lottery.”  One baked “puppy biscuits” inspired by the grocery list in “The Secret Life of Walter Mitty,” and related to the main character’s rich imaginative life amidst banality.  Another baked a social experiment to life, making one person choose what another would get to eat, knowing one was a “lady,” and another a “tiger.”  And the fifth student pulled out a box with two doors.  They’d used straws, tape, brads, cardboard, and hand-drawn pictures to create an ever-changing box of chance, since the options could be changed at will by the student before the next person chose a door.

If these kids aren’t amazing, then I must not understand the definition of the word.  I love, love, love them, and I can’t wait to see what they come up with at our next meeting after they’ve sunk their minds into some Halloween treats.

Amidst all the chaos, house and car woes, and the endless cycle of chores, Daughter scored well on her first Japanese test, my son is starting to recover from his unexplained viral infection, I started a Patreon account.  Come November 1st, I’ll be taking the Flash Dash Challenge again, writing one flash fiction piece a day for thirty days, AND it looks like I’ll be a panelist and presenting my debut novel at Norwescon 40.  I’m “nervcited” (my daughter’s term).

Dear Nieces and Nephews of the Heart,

We may not be related by blood or even marriage, but we are bound by love.

Through the years as you’ve grown, I hoped to prove to you I could be depended upon to listen to your concerns and give you lots of love beyond the family of your birth.  Being an Auntie to you has been a joyous experience for me, and will continue to be all my days, whether I see you often for adventures or only online for now.  I will always love you, secret gifts and money to you when I can, and adore hearing about your passions, flirtations, and mistakes — especially the funny ones.

And like a good Auntie I will always be there to support you as you struggle with your changes, to hear you out when you’ve been wronged, and if necessary, protect you from those who seek to harm you.

It’s clear my efforts have not been in vain, but I have to tell you now: I am not the one to come to to complain about your parents for being, well, who they always have been.  Remember, I became your Auntie because your parents are my dearest friends.  As teens, it’s normal, nay, almost inevitable that once you begin to feel the invading surge of hormones as they flood your brain, muscles, and . . . autonomic functions . . . you’ll find a deep dislike of almost everything your parents do.  The best people to talk to about this are your age peers, because they’re going through it, too.

But those things you find so irritating?  Those are often the traits I love most about them. They are what make them your parents.  Some of you don’t realize this, but those habits and quirks, they’re magical.  They have the ability to put a smile on my face, to lighten my psychological burdens, and to pull me out of the darkness.

You may not realize how important these parental traits are, whether singing spontaneously in public, making treasures out of trash, geeking out over some new discovery, or breaking into a dance at the mere thought of something pleasurable, but they helped shape you.  They taught you as you grew how to take the cruelty and pain of the world, the everyday ugliness, and turn it into something else.  They’re survival tools.  You think they’re annoying now, but one day, they might save your life, or the life of a dear friend.

Remember, you can tell me anything and listen, but don’t expect me to sit silently as you complain about the best things your mothers and fathers bring to this world.

My family grows every year, and more so than most because we have both relatives by blood, marriage, or adoption, and chosen family–this friends who have grown as close as siblings, aunts, or uncles.

Because many of the people we love either live far away or are only available to visit a few times a year, it can make reconnecting with them hard on a toddler or young child to cope with. Large gatherings are even worse.

Imagine being a small person again, and these tall people come toward you to hug you, pick you up, give you kisses, or claim familiarity, but you don’t have a clue who they are. You look at them with distrust, and cling to your mother or father.

It takes regular, repeated encounters for little children to remember who people are. When my father and step-mother make the trip from Arizona or Japan to visit twice a year, my son doesn’t remember them well enough to feel comfortable having them hug him. It takes time for him to feel safe around new or forgotten faces.
Once comfortable, he’s incredibly affectionate and loves to perform or engage in some activity.

But some of these visits are short, and he doesn’t get the time he needs to relax around everyone (Christmas Eve is especially stressful). So to help him recall names and faces, I made him a photo album.

I asked my family and closest friends to send me photos I could print off (or wallet photos through the mail). I searched for something that would hold multiple wallet-sized photos, and once I had everything printed and together, filled his mini album with photos in a somewhat cohesive order. I put family or household groups together, featured the kids first in most cases, and did my best to order things in terms of relationships.

After I showed it to him, he thanked me, and hugged it to him. In the first twenty-four hours, he looked through it seven times, three of those times with me naming each person he couldn’t name. I often prefaced each name with relationship, e.g., “This is your cousin Jack.”

Even my daughter found it helpful, since she forgets things easily. It prompted her to ask about clarification of relationships she wasn’t sure of, so I drew up a quick, rough family tree to show her. This is especially fun to do at her generation, because there’s a long string of half-siblings who are only connected to those on either side of them.*

If you wish to make a family photo album, whether for a small family or a big one,  you just need:

Make sure the album you choose can be changed should new family members need to be added, and to update photos, especially of children who change so quickly.

*The long sequence of half-siblings: Daughter has two brothers: the Little Fox, and an older brother from her father who lives in Oregon. He has half-siblings of his own, not related to Daughter. My partner has an older daughter, my unofficial step-daughter, who lives in Montana. She’s sister to my son, and has a half-sister of her own she grew up with who has no direct relation to either of my biological children. Six children, all related to each other by one another’s half-siblings.

Meanwhile, my half-sisters are younger than my daughter. Our family tree is interesting, to say the least.

**I intended to label each photo, but decided against it. Should we need to add someone to a household, it would mean moving everyone over and having to peel off labels on the covers. I don’t want to add them to the pictures, either, because it covers too much of most small photos.