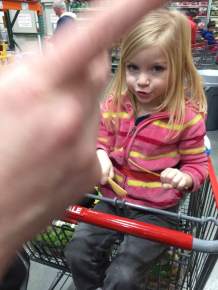 It’s not the first time he’s been interested in numbers, but it’s a resurgence with an intensity he never showed before.  As I mentioned in last week’s post, he started becoming interested again with the books One Nighttime Sea and Wizard of Oz Counting.

One of his favorite things to count — his absolute favorite — is counting letters.  He especially likes seeking out the letters in his name (he learned to spell his name courtesy of a cousin who sent a wooden bench carved with his name in it).  He’s always looking for the As and the Cs.  Sunday night, I read the whole Animalia to him, slowly enunciating all the words.  We didn’t just count the obvious letters, but also those hidden within the art on each page.  Sometimes we went far beyond his knowledge of counting, but he did his best to repeat the numbers I said.  Some pages went up to 23 instances of the letter in question.

This combined interest in both numbers and letters has become an exciting way of integrating the basics.  Though we’d never push him to start reading or doing math so early, we absolutely support him when he shows such passion for something.  Since he’s so focused, I’ve even started introducing the concepts of addition.  When we’re counting letters or animals or some other items in a book, and the items in questions are split between the folds, I count the whole, and then count those on either side of the page and add them together.

For example, seven lemurs are spread across two pages.  We count them as seven together, and then I count four on one page, three on the other, and say, “and four and three makes seven!”

I don’t expect him to repeat this, but by simply talking about it, the concept starts to sink into his mind, so when he starts to focus on adding and subtracting objects in his world, these lessons will have laid a preliminary foundation.

Random ideas for things to count:

Another part to teaching and learning counting is the concept of zero, nothing, and none.  This is crucial to all levels of mathematics, although the basic vague understanding of it comes along often in a young child’s life when they’re told they cannot have something, or when they insist they want to eat nothing when they’re cranky with hunger.  Nevertheless, as important as zero is, we often don’t remember it in counting, which is why discussions about limbs, for instance, can introduce zero as a number meaning none.

Whenever your little one starts taking an interest in numbers or letters, it’s time to start playing number and alphabet games, and singing songs (e.g. Hickory, Dickory Dock, 10 little monkeys, the alphabet song, and so on.)  Another great resource are “Alligators All Around” and “One Was Johnny” by Maurice Sendak and sent to music by Carole King (these are two books found in Sendak’s Nutshell library).  And if you’re counting months, don’t forget “Chicken Soup with Rice.”  If your little ones are Seuss fans, there’s also Dr. Seuss’ ABC Book; it’s not my favorite, but my son adores it.